In Mazhya Navryachi Bayko, Radhika says that she is facing a financial crisis at the office as Gurunath volunteers to help. 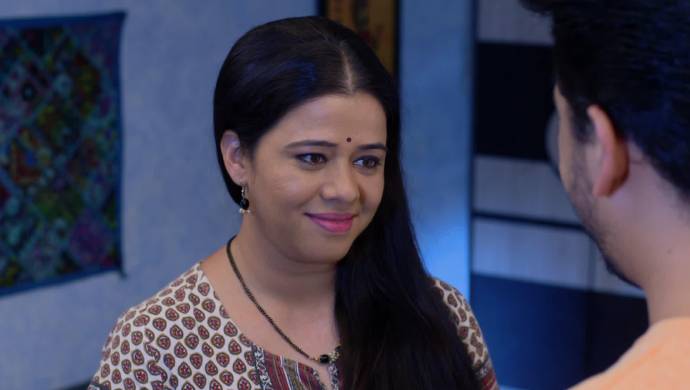 In the recent episode of Mazhya Navryachi Bayko, Kedya and Gurunath meet to discuss Mrs Sabnis’ plan. Kedya is excited that Gurunath’s plan has worked out so wonderfully. He and Gurunath become alert as Kedya is asked to keep an eye on Mrs Sabnis and Shanaya. Kedya asks Gurunath about Radhika’s stolen money but the latter doesn’t reveal where he has hidden it.

Kedya comes home boasting about his meeting with Gurunath. Mrs Sabnis and Shanaya let him think that the latter has a boyfriend. Kedya says if Shanaya goes against him, she won’t get even a single penny. At home, Radhika pretends to be deeply disturbed. On asking, she tells Gurunath and Aai-Baba that the people at the office are asking her to return the stolen money from the farmers. Hearing this, Gurunath falls for her ruse and tries to be the hero by helping her out.

Shanaya and Mrs Sabnis talk about Radhika’s plan. Shanaya tells Mrs Sabnis that she blamed Radhika’s office robbery on Gurunath. Mrs Sabnis is happy as Shanaya says Radhika is going to take revenge and destroy him. On the other hand, Radhika calls Saumitra as their conversation is interrupted by Gurunath. Radhika tells Gurunath that she needs 35 crores rupees as he promises to get her the money.