The film features Akshay Mhatre, Shashikant Kerkar and Manmeet Pem in lead roles. Read our review of the film inside! 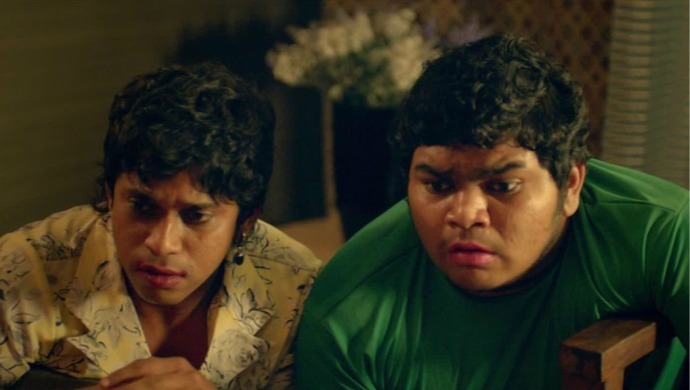 Looose Control starring Akshay Mhatre (Amol), Shashikant Kerkar (Pinak) and Manmeet Pem (Jaggu) tells the story of three engineering students, who are poor in their course and keep failing their exams. They have been given an ultimatum to pass the upcoming exams at any cost, or else their future is in jeopardy.Where most students in this situation would study twice as hard to pass with flying colours, Amol, Pinak and Jaggu take a different route. They choose to make an MMS clip that they can bribe their college authorities with, in exchange of question papers.

An eccentric idea as such needs to be backed by a film of the same nature and Ajay Singh gets it right. The filmmaker has put forth a highly entertaining ride, filled with its share of thrills and laughter. Amol, Pinak and Jaggu get in touch with Rocky Joshi (Kushal Badrike), a pro at MMS film making. He advises them to invite a couple of girls over, spend a night with them and secretly film it on tape. The trio is convinced and as per plan, Amol keeps a small new year gathering at his place, for which he invites his dominating and bossy girlfriend Komal (Madhura Naik). His friends Pinak and Jaggu too manage to get dates.

Diwali 2019: Rampaat, Looose Control – 5 Films You Can Watch With Your…

Ye Re Ye Re Paisa Review: Umesh Kamat And Tejaswini Pandit Will Take You On A…

But everything in this film is unpredictable, including Amol’s plan. His girlfriend pretends to cancel on him, in turn wanting to surprise him by showing up last minute. Amol panics thinking that his plan is failing. He gets further stressed when Jaggu and Pinak’s dates too, call off the night. So what do the three do? They hire call girls. From here, we are taken on a roller coaster ride and there’s no looking back. Everything goes downhill for the trio and you can only imagine the madness when Komal shows up, finding two hookers at his flat!

The performances are on point, with Shashikant taking the cake with his impeccable comic timing as Pinak. He is well supported by co-stars Manmeet and Akshaye, who do justice to their roles. You can expect nothing short of excellence from Kushl and he delivers just that as the quirky Rocky Joshi. Don’t miss his crazy hairdo and dressing sense! A special shout out to Bhau Kadam, Shashank Shende and Aarti Solanki. Bhau is seen as a police officer Raskar who is chasing a brothel owner Dattya (Shashank). Aarti, on the other hand, plays one of the call girls Julie, invited by Amol and his friends. All the three actors are hilarious with their acts and have their own side story in the plot of the film.

Aside from being high on entertainment and humour, Looose Control is also a very relatable film. Most engineering students will be able to connect to Amol, Pinak and Jaggu’s struggle. They are three vulnerable guys, looking for an easy way out. Even though they are wrong, one can’t help but root for them and wish that everything eventually works out for this trio. Their friendship is special and the actors do justice in portraying the same.

Happy New Year! ❤️ How was your new year's? 😉 Check out the trailer of my upcoming film Looose Control. Link in bio.

Looose Control is quick-moving and will keep you on the edge of your seat. Every minute of the film is filled with some witty one-liner or a slapstick act that will make you laugh. So if you’re looking to be thoroughly entertained, give this film a try!