We see the two completing their wedding rituals. But why is Madan troubled? 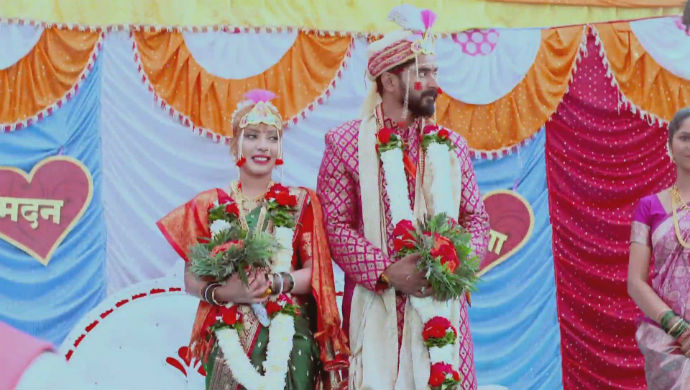 In the recent episode of Zee Marathi’s Lagnachi Wife Weddingchi Bayko, we saw Maria and Madan’s marriage taking place. What the former doesn’t know, is that the latter is tricking her. He is only pretending to marry her, so that she doesn’t reveal the family secret. But he has told Maria that he is marrying her for real. Kajol, on the other hand, thinks that Maria is indulging in the wedding festivities, as she wishes to be a bride and knows that all this is fake. However, she is being tricked as well by Madan, who hasn’t told her about Maria thinking that their wedding is real.

As Maria and Madan are being wedded, the pandit ji performing the ceremony, asks them for the mangalsutra. Madan is in a fix, as he doesn’t know have one for Maria. Kajol then hands over hers to the pandit, to satisfy Maria. The wedding continues as planned and soon Maria and Madan take the pheras. The latter freaks out as only he knows that the two are married for real, since they have completed the 7 pheras. He looks over at Kajol, who is oblivious to the fact, and thinks that this is all an act. What will happen next? How will Madan save himself from the mess that he has created? Stay tuned to find out!