Kanala Khada: 5 Revelations By Ashok And Nivedita Saraf That Married People Can Relate To!

The husband and wife duo were their usual, charming selves on this popular reality show, hosted by Sanjay Mane. 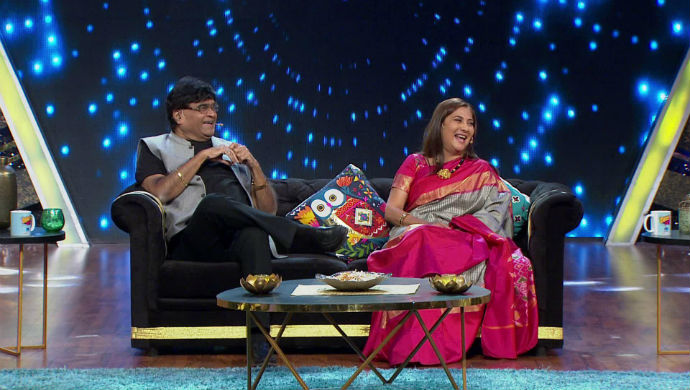 Zee Marathi’s popular show Kanala Khada, hosted by Sanjay Mone, is a fun hat show that hosts the who of Marathi cinema. This week, husband-wife duo Ashok and Nivedita Saraf were seen on the show and as expected, they were their funny and charming selves. The two shared their journeys and spilled beans on each other’s quirky habits at home. Apart from this, Ashok and Nivedita also made evident the strong bond they share with their adorable chemistry. These two are are giving us some serious marriage goals!

Watch Ashok and Nivedita’s fun chat with Sanjay, in the episode here.

Here are 5 funny and heartwarming revelations made by the couple that all married people can relate to.

1. Nivedita rags Ashok for his over punctuality

It’s one thing to be on time, but to be half an hour before time? Now that’s a bit too much and this quality is what Ashok was ragged about! Nivedita revealed that Ashok is punctual to the point where he starts nagging her from 7 am, if they have to leave the house at 6 pm the same day.  She left the audience in splits by mentioning that there have been times when the couple has reached a wedding, even before the arrival of the bride and the groom.

Ashok told the host that Nivedita believes she is a great driver, but the reality is different. He revealed that once, Nivedita drove their car over a divider!

Going by the happy-go-lucky man Ashok is, you wouldn’t imagine him losing his temper often, right? But Nivedita revealed, that the actor gets angry easily. We wonder the tricks that the actress applies, to calm her man down.

4. “Ashok wants the house to be spick and span..as long as someone else is doing it.”

Haha! We bet all wives reading this must be nodding. Nivedita told the audience about Ashok’s laziness at home and how he expects her to do all the work. She said he calls her all the way from the kitchen to the bedroom, just for the curtain to be pulled.

Considering how over punctual Ashok is, we wonder how he and Nivedita, got over this one! Ashok ragged Nivedita and revealed that due to her delay, they missed catching a train. When they reached the station, they saw their train leaving the station. Been there, done that? The show ended on a heartwarming note when Ashok and Nivedita revealed what they love about each other the most. She spoke of Ashok’s commitment and dedication to his family and work. He on the other hand thanked her for making his family her own and appreciated her for how adjusting she has been all these years.

Awww. Now if this doesn’t melt your heart, we don’t know what will. Tell us what you love the most about this couple, in the comments section below.

Catch the rest of the episodes of Kanala Khada, exclusively on ZEE5.