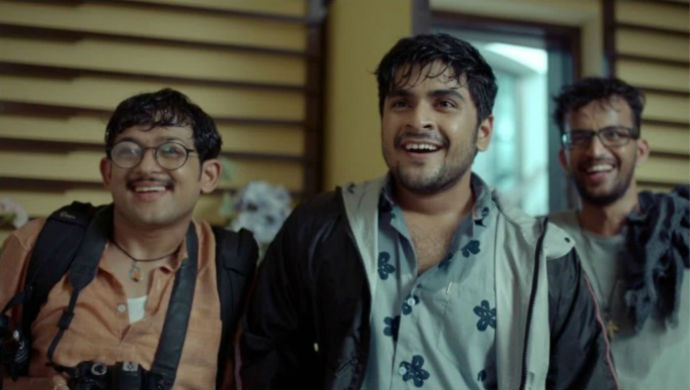 ZEE5’s latest original Marathi series Kaale Dhande, has all the elements one looks for- humour, drama, romance and tragedy. The series features Mahesh Manjrekar, Neha Khan and Shubhankar Tawade in lead roles. It tells the story of Vicky (Shubhankar), a budding photographer, who finds himself embroiled in tricky situations due to certain circumstances. The beginning scene sets the tone of the bold, daring and hilarious series. Vicky is looking at adult content on his phone while helping himself in the bathroom. He has his headphones on and as a result, can’t hear his parents and grandmother calling out to him from the living room.

Watch the trailer of the series here.

Vicky continues to pleasure himself and meanwhile, his family starts getting panicky. Word spreads across the building that “Vicky baba” isn’t opening the bathroom door. Cut to, Vicky finally steps out of the loo to face 100 worried and angry faces, as he unplugs his headphones by mistake and the adult clip starts playing loudly on his phone. As this scene ends, you know you are in for a laughter riot. Shubhankar is a pleasure to watch as Vicky, a man who is girl-crazy and quick to lose his inhibitions. The actor gives a gripping performance and convinces you with his act. His girlfriend Swapnali is played by Neha, who will leave you in splits with her impeccable comic timing. Swapnali appears to be sexy and sophisticated, till she opens her mouth.

Her high-pitched voice and idiotic jokes throw Vicky off, the first time he sees her. But that doesn’t stop him from sharing a steamy lip-lock with her on the beach, the next minute. And this is where the story begins. Vicky’s family friend Baban (Nikhil Ratnaparakhi), spots him making out at the beach and tells his family. But Vicky doesn’t let it go and plots a plan to seek revenge from Baban. What starts out as a harmless chain of events soon turn dangerous, and lands Vicky and his friends in trouble. Things turn ugly to the point where Vicky gets unintentionally associated with a don. How and why he got there, is for you to find out!

Hutatma Review: This Anjali Patil Starrer Sets A High Standard With Its Gripping…

Trust Mahesh Manjrekar to make everything better with his talent and he does just that, as Anna Bhai. The actor brings the right mixture of swag and humour on the table and is undoubtedly the best part about the series. Other actors such as Nikhil and Vicky’s friends Sam, Sudarshan played by Onkar Raut and Ruturaj Shinde too deserve a pat on their back for stellar performances.

As a series, Kaale Dhande ensures entertainment at every step of the way. The narrative is filled with interesting plot twists that will surprise you, just as you start getting used to the story. The crisp direction and fun performances make this a must-watch series! Give it a shot if you’re looking for some hilarious content that’ll make you forget your worries!

Watch all the episodes of Kaale Dhande here and stay tuned for more updates.