In Pics: All The Behind-The-Scenes Action Of Rampaat’s Abhinay Berde, Kashmira Pardeshi

The film has been directed by Ravi Jadhav and also features Kushal Badrike. More details inside! 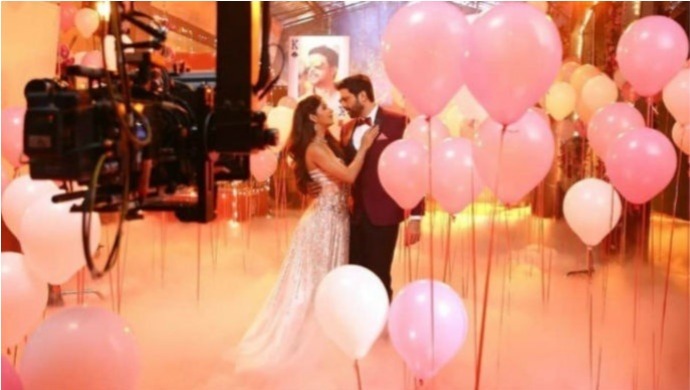 When it comes to films and television shows, we only get to see what’s shown to us. From the dialogues to the costumes to the setting, everything is perfect. But behind-the-scenes, only the cast and crew know how many retakes it takes to get a scene right! The best part about watching the making of a film/ TV show is hands down the bloopers, right? The outtakes are hard to access, so the next best thing is pictures of all the off-reel drama, what say? Ravi Jadhav’s Rampaat starring  Abhinay Berde and Kashmira Pardeshi has entertained audiences with its glitz and glamour. And we have pictures to show you all the off-screen action!

The film tells the story of two youngsters Mithun and Munni, who leave their small towns and come to Mumbai to become actors. We are then taken on a journey of their struggle, highs and lows. Here are some behind-the-scenes pics of Kashmira shooting for a track from the film.

You can see her having a word with director Ravi and then diving into the scene with one of the supporting cast members. Here’s another gorgeous picture of the actress, in black and white.

Check out this one, where Kashmira preps for her role as Munni. Though she wants to become an actress, Munni is forced to pursue wrestling on the side, to fulfill her father’s dream. Kashmira recalls training with real wrestlers of Kolhapur as her favourite part of the film.

And here’s a precious picture of Abhinay and Kashmira with their boss man, Ravi! The three of them visited Pune’s famous Dagdusheth Halwai Ganpati temple, before the release of their film.

Tell us which of these images did you like the most. And don’t forget to watch Rampaat! For more entertainment, check out the collection of fun Marathi films on ZEE5 here.

Swarajyarakshak Sambhaji: Look Royal Like Yesubai With These 4 Jewellery Essentials