We look at how Anita Date- Isha Keskar, Akshaya Deodhar- Dhanashri Kadgonkar and others are good friends offscreen, despite their onscreen rivalry. 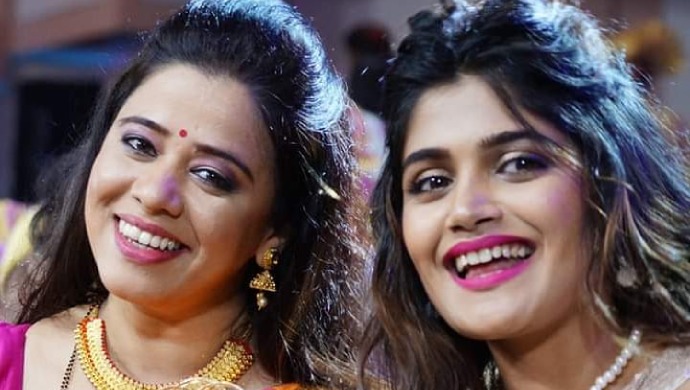 They say that two actresses can never get along. But our Marathi actresses our busting this age old myth and how. There are certain popular onscreen rivalries that all ardent Zee Marathi fans are familiar with- Shanaya And Radhika in Mazhya Navryachi Bayko, Nandita- Anjali in Tuzhat Jeev Rangala etc. But did you know that the actresses who play these characters are actually great friends in real life? That’s right folks, just because they are enemies in these serials doesn’t mean they can’t get along in real life!

With Friendship Day around the corner, we look at some special off screen bonds that have lasted, despite the onscreen wars.

While Anita is seen as the dutiful, sanskaari Radhika in Mazhya Navryachi Bayko, Isha is the evil Shanaya who has made the former’s life miserable. Both are married to Gurunath, who leaves Radhika for Shanaya. Now with a history like this, there’s bound to be some hardcore rivalry between these women.

But the actresses don’t let it translate into a cold war in real life. Isha and Anita are close friends and even spend time together. In an exclusive interview with us, Isha revealed that Isha and she stay nearby and even take time out to catch up, along with their co-star Abhijeet Khandkekar, who plays Gurunath.

These two hate each other’s guts in Tuzhat Jeev Rangala. Akshaya is seen as Anjali in the series, the elder daughter- in- law who is adored by the Gaikwad family. Dhanashri is the vamp Nandita who burns with jealousy everytime Anjali gets attention. But off-screen, it’s hard to tell that these actresses are spitting fire at one another in the show.

Akshaya and Dhanashri have always been great friends and their Instagram posts are proof. The two indulge in some girly fun in between shots and remind fans that women aren’t insecure like the popular stereotype!

Gayatri and Abhidnya were seen as Isha and Myra in Tula Pahate Re. The show has ended but one can’t forget their rivalry. Myra was always pining for Vikrant’s (Subodh Bhave) attention in the show who had his eyes only for Isha. So naturally, there was a intense amount of jealousy and insecurity. But the actresses are far from those emotions in real life and share a great bond. Abhidnya even posted a very special wish for Gaytari on her birthday recently.

Which of these is your favourite real-life bestie pair? Tell us in the comments section below and wish you all a happy Friendship Day!

Friendship Day: Vazandar, Pipsi - 5 Films You Can Watch On ZEE5 With Your Best Friends