The Ratris Khel Chale 2 actress who plays Shevanta on the show, says that she sees her co-star Madhav Abyankar as a father figure. 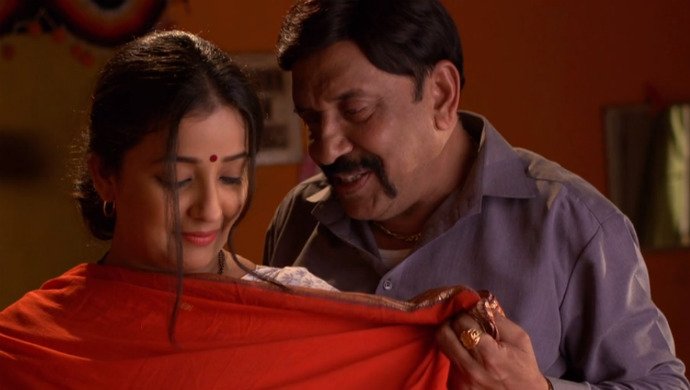 If there’s one name that is synonymous with the massive success of Ratris Khel Chale 2, it’s that of Shevanta. With her light eyes, flirtatious ways, dazzling smile and hour-glass figure, this mysterious character has the nation going crazy over. In the serial, Shevanta is shown to be involved in an extra marital affair with Anna, a sly man with a hovering eye. But thanks to his ways, the beauty is oblivious to his evil side. The characters are played by Apurva Nemlekar and Madhav Abhynakar, who in reality, share a very different equation.

Watch a romantic scene of the two, from the show here.

In an exclusive interview with us,, Apurva opened up about her co-star Madhav and said that owing to their sizzling chemistry onscreen, people often think that the two are dating in real life. “Many people keep asking me if I and Madhav sir are involved. I find it very funny because he’s almost my father’s age. I have always looked at him as my father-figure.”

Apurva further reveals that she lost her father a year ago and since then, if there’s one person whom she can “speak openly to,” it’s Madhav. “When we shoot, for that period of time, we are Shevanta and Anna. But once we pack up, the bonding between us is like father-daughter. Of course it gets a little difficult going from a father-daughter bond to romancing onscreen.”

But it depends on what you see onscreen and how the audiences take it. Madhav Sir makes me feel extremely comfortable and despite shooting so many romantic scenes together, there has never been any awkwardness between us,” she adds.

We are glad that the actress shares such a great bond with Madhav and how they use the same to transcend into great chemistry onscreen. Wouldn’t you agree?

Post your thoughts about Shevanta and Anna’s jodi in the comments section below. And stay tuned for more exclusive bytes from Apurva here!

If you like horror shows, watch Ek Ghar Mantarlela streaming on ZEE5.