The Mazhya Navryachi Bayko actress says that she shares a great friendship with her co-star, who plays her ex-husband Gurunath on the show. 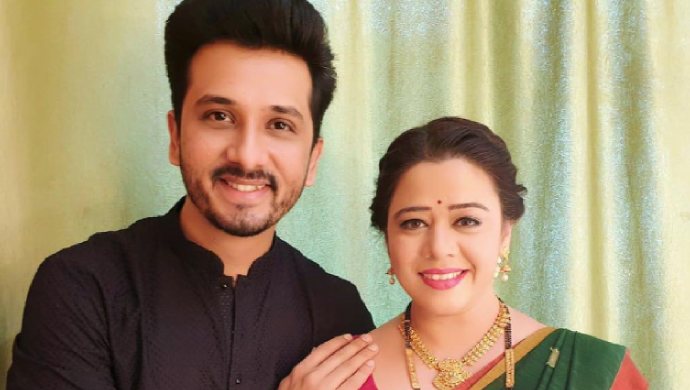 Anita Date is one of the most well-known names in the Marathi television industry today. The actress plays Radhika in Zee Marathi’s Mazhya Navryachi Bayko, a character that is so ideal, it’s almost perfect. She is righteous, kind, caring, strong and independent. In an exclusive chat with us, Anita opened up about how she doesn’t feel any pressure in playing such a perfect character, as Radhika is an inspiration for many women. We then quizzed her about her equation with Abhijeet Khandkekar, who plays her ex-husband Gurunath on the show. Anita says, “Abhijeet is a dear friend. We both keep learning from each other while acting together. It’s been three years and both of us haven’t fought over a scene yet.”

She adds saying, “We both listen to each other and try to do things that will benefit the other. We always strive to deliver our best and please the audiences. We don’t have any ego problems between us and enjoy each other’s company. Not just Abhijeet, we all share a certain friendship on and off set. And the credit goes to my crew and the entire team.”

Mazhya Navryachi Bayko has had a successful run for three years and has garnered many fans. While there’s a lot of appreciation for the show, there’s also criticism. How does Anita deal with the latter? “It’s okay as everyone has a point of view,” she says, adding, ” however I’ll say that if people are not liking something, it’s important for them to know that the team has thought out the content properly and are showing certain things to highlight some specific points. People should honour their point of view as well.”

Ask her what she would say to all her fans who have loved and followed the show throughout these years and Anita says, “I would urge people to follow Radhika’s character as she is extremely strong and inspiring. She has a lot of purity. Many women want to venture into certain things but aren’t able to. But if they have the will power and desire, then they can learn a lot from Radhika’s character. There’s also a character called Saumitra (on the show) who is very supportive of Radhika. I urge people to recognize such people around them and thank them. Such support systems are very important.”

Tell us what you think of Anita’s views in the comments section below and stay tuned for more updates here! Catch all the episodes of Mazhya Navryachi Bayko, streaming on ZEE5 here.