We look at how Prajakta went from looking like a girl-next-door to the fierce Yesubai, in Zee Marathi's popular show. 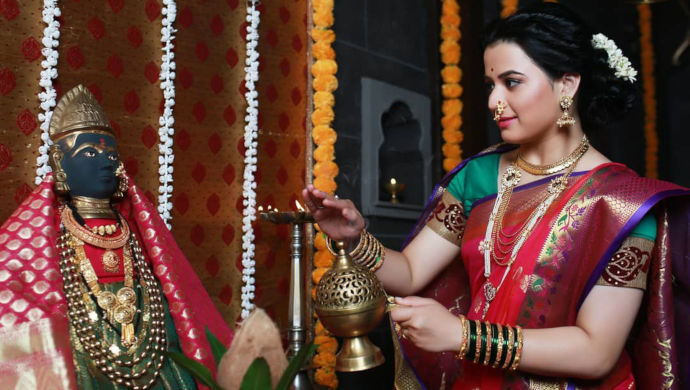 Prajakta Gaikwad as Yesubai in Zee Marathi’s Swarajyarakshak Sambhaji, is inspiring to say the least. She is strong, confident, level-headed and dependable. These qualities make her Sambhaji’s favourite queen, and she even helps in strategising his game plan for wars. A character is made appealing by the actor who plays it and Prajakta does a splendid job in playing Yesubai.

Watch her in an episode from the show here.

The actress in an interview revealed that she had to imbibe the mannerisms of a royal queen and even learn horse riding, for the role. Aside from playing the part, an actor has to look it to. It all boils down to how the actor carries off his/her appearance and Prajakta proves that no one else, could have done justice to Yesubai, the way she has.

If you look at Prajakta’s earlier appearances, you will get a hint of the remarkable transformation the actress has undergone, to look like Yesubai. For instance, check out this picture where the actress looks nerdy, and your tupical girl-next-door.

And now look at this picture of the actress decked up in traditional royal, Maharashtrian attire, as Yesubai.

It’s hard to believe that the two are the same person, right? Prajakta is seen wearing a traditional saree, with golden necklaces, and a nath. She sports the chandrakor on her forehead, which is a half-moon shaped design, worn by royals at the time.

Here are some more before and after pictures of the actress:

Doesn’t she look gorgeous as Yesubai? What do you think of Prajakta’s transformation? Let us know in the comments section below!

Catch all the episodes of Swarajyarakshak Sambhaji, exclusively on ZEE5 here.