Watch the promo inside to know all about the upcoming episode starring Amruta Dhongade and Tejas Barve! 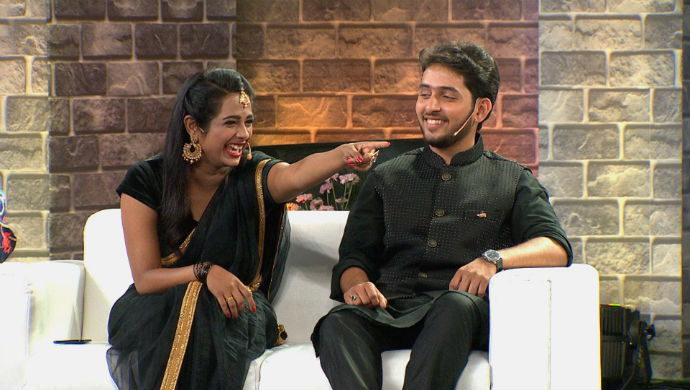 The upcoming episode of Zee Marathi’s entertainment show Chala Hawa Yeu Dya, will feature Amruta Dhongade and Tejas Barve. You popularly know them as Summi and Samar from Mrs Mukhyamantri. The couple will be entertained by the star cast of the show including Shreya Bugde, Bhau Kadam, Bharat Ganeshpure and Kushal Badrike. The comedians will display a skit for their guest stars in which Shreya will be seen playing Summi! The hilarious promo of the upcoming episode will show Shreya and Kushal enacting Samar and Summi’s wedding sequence from the show!

In the video, you can see Shreya dressed as Summi in a bridal avatar, and narrating a poem as per Maharashtrian wedding traditions where the bride is supposed to take the groom’s name, by saying a ukhana. What happens next? Watch here.

Shreya recites the poem and calls Summi’s mother a female version of Bollywood Suniel Shetty! Interestingly, the actress who plays the part is seated in the audience. Lol. Kushal, who is playing the character in the skit, suddenly breaks into a mimicry of Suniel and leaves everyone in splits. Stay tuned for this hilarious episode and catch all the updates here!

Watch all the episodes of Chala Hawa Yeu Dya, streaming for free on ZEE5 here.