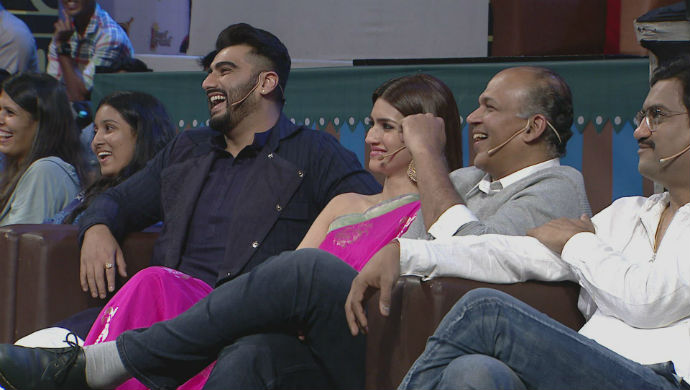 Not only is Zee Marathi’s Chala Hawa Yeu Dya a hit with Marathi cinema but also Bollywood. Many stars including Shah Rukh Khan, Sara Ali Khan, Ranveer Singh, Aamir Khan etc. have graced the popular entertainment show as celebrity guests. Next in line are Arjun Kapoor and Kriti Sanon! The actors, who will be seen in an upcoming periodical, will promote their film on the show along with director Ashutosh Gowariker. And, as usual, you fans can expect humour, drama and much more.

The latest promo shows Kushal Badrike resorting to his hilarious antics once again. The actor will be seen imitating Bollywood’s ace actor Hrithik Roshan! As some of you may know, the star has been directed by Ashutosh in his previous film. So, what is the director’s reaction to Kushal’s mimicry? Watch here.

The director can’t seem to stop laughing and nor can we! And did you notice Arjun and Kriti’s laughter bout too? It’s going to be an entertaining episode so don’t miss it at any cost.

Tell us what you think about it in the comments section below and stat tuned for more updates.

Catch all the episodes of Chala Hawa Yeu Dya, streaming for free on ZEE5 here.

Agga Bai Sasubai: 5 Crucial Points Brought Up By Shubhra That Everyone Needs To Hear