Abhijeet and Asawari come closer! Is the beginning of a beautiful love story? Find out. 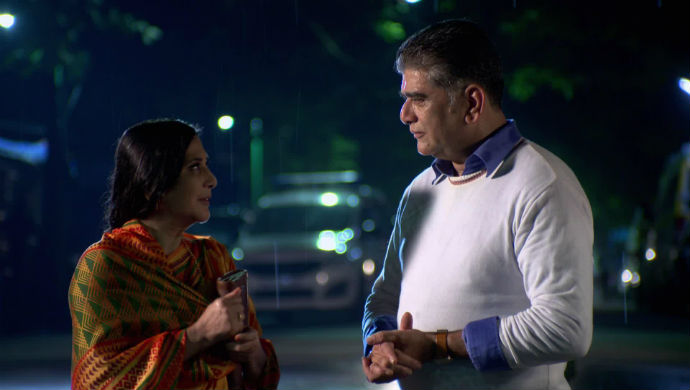 In tonight’s episode of Agga Bai Sasubai, Asawari walks out of the restaurant after meeting Abhijeet and gets worried after noticing that Shubhra isn’t around. Just then, Abhijeet comes out and notices that Asawari is alone. He asks her why she hasn’t gone home yet and she reveals that she has been waiting for her daughter-in-law. Abhijeet offers to drop her home. He takes her to his bike and Asawari feels a little conscious about sitting behind him. Abhijeet realises that she is hesitant and pretends that his bike isn’t starting. He calls for a rickshaw for them but the driver says no. Abhijeet offers to walk it home.

Asawari calls up Shubhra from Abhijeet’s phone and the latter hurriedly cuts the call and tells her (Asawari) to travel safe. Meanwhile, back home, Shubhra reaches late and Soham questions her about being late. Ajoba yells at her and asks her about Asawari. Shubhra tells him that she met a friend and is on her way. Ajoba says because of Asawari being late, they had to order dinner from outside. Shubhra reminds him that she had made dinner. Ajoba retaliates by saying that Asawari needs to come home quick, heat up the dinner and feed him. Shubhra says she will do the same and heads to the kitchen. Upon entering, she notices that that there’s mess on the counter. She hears Ajoba cribbing about spending money on the food they ordered.

Shubhra questions Soham about the mess in the kitchen and points out that she isn’t capable enough to even heat the food for himself and Ajoba. She states that everyday it’s Asawari, running around, fulfilling everyone’s needs. Hence Soham can take the initiative to help Ajoba when Asawari isn’t around. Shubhra further defends her mother-in-law and says that he needs to stop being so dependent on her as he isn’t a kid anymore. She orders him to clean the mess in the kitchen.

On the other hand, Abhijeet and Asawari are taking a walk when it starts raining. He pulls her inside a tapri to protect her from the rain. Abhijeet orders tea for them and notices that Asawari is tensed about going home late. The rain stops and they continue their walk. He asks her what she likes the most about the rains and she begins to talk of all the things that she needs to do once she gets home. Abhijeet then asks her about her favourite dish and Asawari talks about what her Ajoba likes to eat. He gets amused and points out he was asking what she likes and not what her Ajoba does. Asawari says she doesn’t know how to answer this question as no one has ever asked her about what she likes. Abhijeet feels sorry for her and asks her to keep her favourite dish in mind and let him know the answer by next morning. He adds that he will cook it for her.

What do you think will happen next? Stay tuned for all the updates here! Catch all the episodes of Agga Bai Sasubai, streaming for free on ZEE5.

Will Radhika And Saumitra Finally Get Together? Watch Mazhya Navryachi Bayko On ZEE5!