What does she make for the celebrity chef? Find out inside! 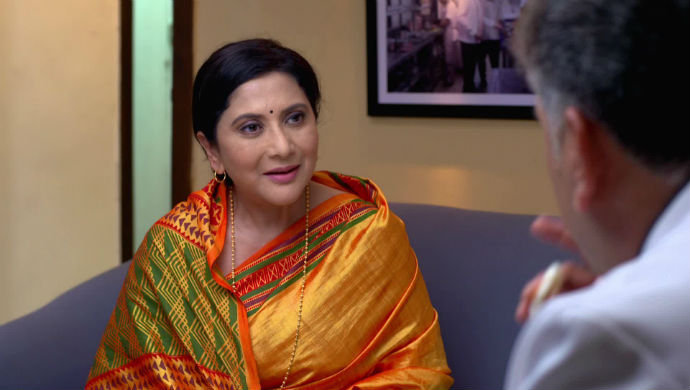 In tonight’s episode of Agga Bai Sasubai, we saw Ajoba frantically calling out to Soham. Shubhra tends to him and says that Soham is not at home. She then asks her sasubai Asawari about why Ajoba needs Soham so urgently. She says that the cheque that Abhijeet has left behind for the camera, needs to be deposited. Asawari adds that she isn’t sure of how to even get that done since Abhijeet has left the camera behind as well. She says that if she doesn’t give it to him, then he’ll know that the camera is very dear to her. Shubhra points out that there’s nothing wrong in making Abhijeet aware of the same.

Later Soham returns and Ajoba tells him that they need to go to the bank to deposit the cheque. Asawari tries to tell him that she doesn’t want the camera to be sold as it belongs to her late husband. But Ajoba keeps reiterating that he managed to sell the camera at a decent price. Shubhra intervenes and points out that the camera is still at home. Asawari says that it should be kept here. Ajoba gets furious at Abhijeet for not taking the camera and says that he no longer will deposit the cheque. Soham says that Asawari needs to clarify things with Abhijeet once and for all. Ajoba intervenes and says that he will call the chef himself . He does so and gives the latter an earful.

Asawari interrupts the conversation and requests Abhijeet to come home and take the camera. He says he can’t as it means a lot to her. Asawari says she will give him the camera herself. A little while later, Shubhra makes Ajoba realise that his move to sell the camera was a bad one. She adds that she went shopping and has bought something for him and Asawari. Ajoba melts and says that there’s no need to sell the camera and that he’s not crazy about getting the money.

Shubhra tells Asawari that now they should return the cheque to Abhijeet and that she should make her special coconut barfi to make it up to him. Later, the two visit Abhijeet’s restaurant and Shubhra encourages Asawari to go meet him alone. She does and offers him the sweet that she made for Abhijeet. He relishes them and compliments her.

The episode ends with him fondly looking at her and Asawari blushing. Aww how cute! Do you think Asawari will give him the recipe for her delicious coconut sweets and invite Abhijeet for a personal cooking class? Stay tuned! Catch all the episodes of Agga Bai Sasubai, streaming for free on ZEE5.

Will Radhika Realise Saumitra's Feelings For Her? Watch Mazhya Navryachi Bayko On ZEE5!