In tonight's episode, Shubhra learns that Ajoba had assumed about Maddy being Abhijeet's wife. 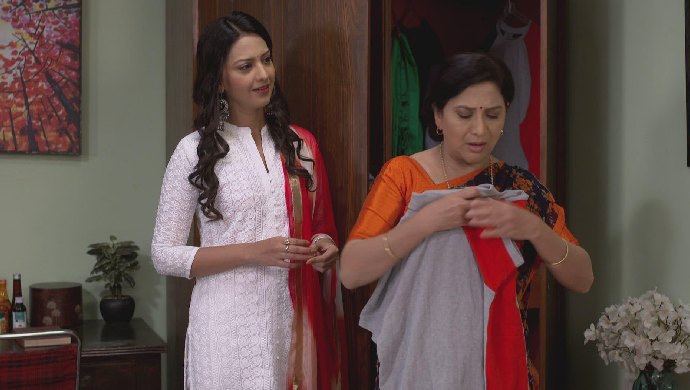 In the last episode of Agga Bai Sasubai, Abhijeet asks Maddy to deliver the tiffin box at Asawari’s place. When Ajoba and Karkhanis ask her about Abhijeet, she blushes and both the men think that she is Abhijeet’s wife. On the other hand, Asawari tells Shubhra that she is not sure if Soham will join them. A few moments later, Soham shows up saying that he decided to come because he was feeling hungry.

In tonight’s episode, when Asawari and Shubhra come home, Ajoba tells them that Abhijeet’s wife had come to deliver the tiffin. Hearing this, both the ladies get shocked.

Next day, Ajoba tells Asawari to bring tea and sweets for Karkhanis. He secretly eats the sweet and tries to hide it from Shubhra. When Shubhra questions him about it, Karkhanis tells her that he was mad at Abhijeet because he kept a secret from them about his marriage. Shubhra then learns that Ajoba assumed that Maddy was Abhijeet’s wife and goes to inform Asawari. Before she could say anything, she notices that Asawari is restless about the secret and decides to keep the secret to herself.

When Asawari comes back home, she sees Maddy in the kitchen and Ajoba tells her that she is Abhijeet’s wife.