In tonight's episode, Shubhra gives a piece of advice to Abhijeet, about losing the competition to win Ajoba's heart. 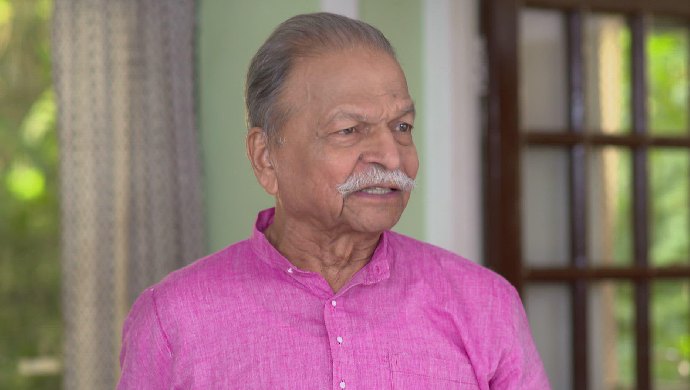 In the last episode of Agga Bai Sasubai,  Maddy gets insecure when she sees Mr Karkhanis managing all the work efficiently. She tries to impress Abhijeet but fails. Abhijeet then goes to the kitchen to learn new recipes from Asawari. A few moments later, Abhijeet claims that he is an expert chef, as he is being trained by Asawari. Ajoba challenges him and says that they will have a competition.

In tonight’s episode, Asawari tells Soham and Shubhra that there is competition going on between Ajoba and Abhijeet. A few moments later, Sulbha Kaku comes there to borrow sugar but Asawari tells her that she will have to wait until the competition ends.

Shubhra gets excited to see the competition between Ajoba and Abhijeet which is why she goes into the kitchen. Abhijeet notices that Ajoba’s kheer is getting burnt and tries to help him. Ajoba finds out that Abhijeet ate all the dry fruits, and leaves to bring some more. Meanwhile, Shubhra tastes Abhijeet and Ajoba’s kheer, and tells him that he is the winner. But she also says that if Ajoba loses the competition, then it would be his last day in their house.

Later, Abhijeet and Ajoba present their kheer dishes and ask everyone to taste Ajoba’s kheer first. Everyone lies to Ajoba, saying that his kheer is delicious. Ajoba feels like tasting his own kheer but before he can have it, Abhijeet grabs the bowl and finishes the kheer made by him. Ajoba feels proud that he made a kheer so delicious that Abhijeet couldn’t resist himself from having all of it.

Later that day, Pradnya sees Abhijeet leaving the house and feels suspicious about his continuous visits to Asawari’s place.