Why does she do so? Read update inside to find out! 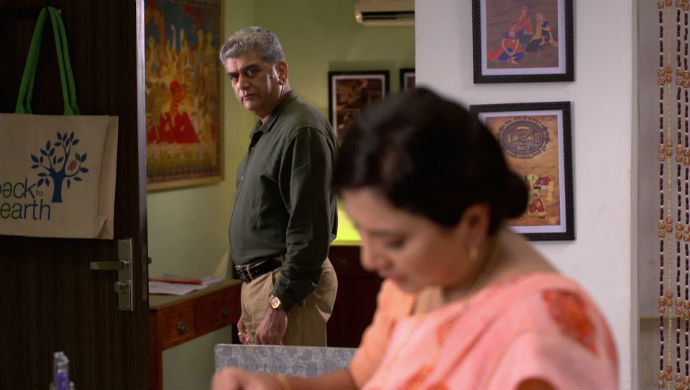 In tonight’s episode of Agga Bai Sasubai, we saw Pradnya informing Ajoba that Asawari and Shubhra had gone to visit Abhijeet at his restaurant. He doesn’t believe her. Ajoba calls on Asawari’s phone and Maddy hears it ringing, realising that she has left it behind at the restaurant. She informs Abhijeet. Meanwhile, Asawari and Shubhra return home to find that Ajoba is furious. He tells them off for taking so much time at the market. Abhijeet asks Maddy to inform one of the boys at the restaurant to return Asawari’s phone to her. But she tells him that no one is on duty. As a result, Abhijeet decides to give Asawari the phone himself.

A while later, Ajoba finds the camera that Abhijeet had given Asawari and asks her about it. She explains and he tells her off for believing a ‘thief’ like Abhijeet. Shubhra intervenes and tries to calm down Asawari, but in vain. She blurts out that they met Abhijeet and Ajoba gets more furious, thinking that the two lied to him about going to the market. Ajoba goes out of control and Asawari gets upset. He continues to humiliate her and calls her an irresponsible daughter-in-law. Ajoba says he ought to throw the camera and makes way towards the door but Shubhra stops him. He yells at her too for interfering in other people’s business. He says that Abhijeet Raje will no longer come into this house and nor will his name be mentioned.

The episode ends with Asawari breaking down and telling Abhijeet to leave and not interfere in their life again. Is it the end for the two? Stay tuned! Catch all the episodes of Agga Bai Sasubai, streaming for free on ZEE5.

Agga Bai Sasubai 10 August 2019 Preview: Abhijeet To Include Asawari's Dish In His Book!