In tonight's episode, Abhijeet tells Asawari that if she doesn't forgive him then he will come into her dreams. 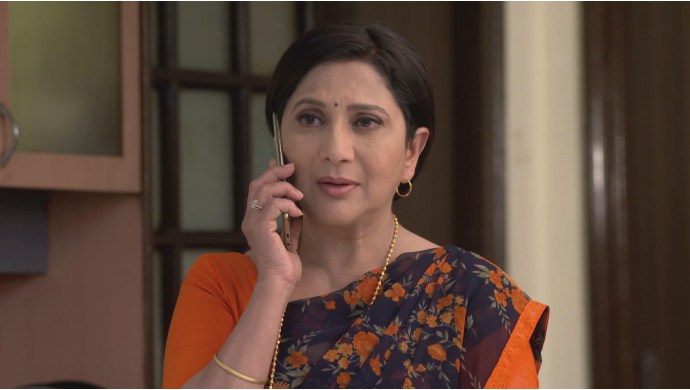 In the last episode of Agga Bai Sasubai, Pradnya comes home to return the kitchen utensils she borrowed from Asawari. She tells her that she and Abhijeet have become good friends now and they are enjoying cooking together. When Asawari goes to Pradnya’s place to return the bowl, she learns that Abhijeet was never interested in learning recipes from her. Rather he used to spend time with Pradnya’s father and mother-in-law. Asawari is worried about Abhijeet as he didn’t come at Pradnya’s place and neither did he shoot for his cookery show.

In tonight’s episode, Asawari is sawake at midnight. When Shubhra asks her the reason, the latter says that she is not sleepy because she has to wind up all the work. Shubhra tells her that she is done with the work and there nothing left for her.

Asawari says that she is going to open the old trunk and organise things inside it as it pending from many days. Shubhra gets excited to see the old stuff. Asawari shows her old clothes of Soham and shares a few memories. Shubhra notices that Asawari is yawning and asks her the real reason for not going to sleep. Asawari then admits that she is afraid that Abhijeet might come into her dreams because she did not forgive him. Hearing this, the latter starts laughing and calls Abhijeet to clarify.

Navratri 2019: Get Inspired By Agga Bai Sasubai’s Shubhra And Buy These 5…

Later, Abhijeet calls Asawari and apologises to her for his mistake. Asawari gets emotional and finally forgives him. Next day, Abhijeet sends a gift for Asawari through a drone but she gets scared thinking its a dangerous object. Shubhra tells her that Abhijeet has sent it. After opening the box, Asawari gets surprised to see Gulabjaam.