And yet again, Abhijeet saves Asawari's day! What does he do? Find out inside. 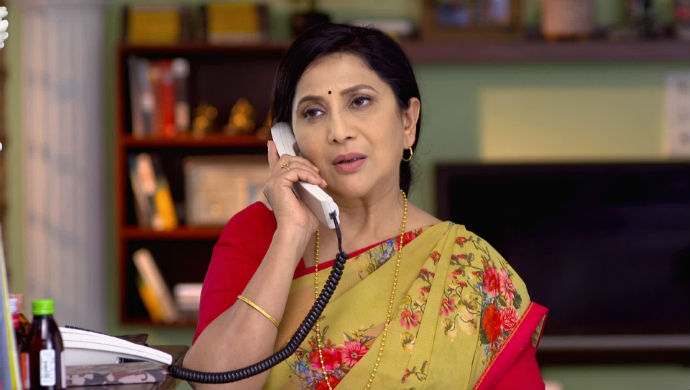 In tonight’s episode of Agga Bai Sasubai, we saw Asawari returning home and being humiliated by Soham and Ajoba. They yell at her for coming home late and not giving food to Ajoba. She apologises and Shubhra defends her saying that it isn’t her fault. Asawari breaks down and Shubhra consoles her, saying that she has the right to step outside and that these grown up men need to be more independent. The next morning, Asawari gets worried when she doesn’t find Ajoba in the house.

It is shown that Ajoba is having a chat with his friend, sitting in the garden outside. Meanwhile back home, his family members are worried when the doorbell rings and Ajoba’s friend walks in. On Ajoba’s orders, he pretends to not know about him and asks whether he’s at home, just to test how worried Asawari and the rest are. Just then, the phone rings and Asawari picks up the call. It’s Abhijeet on the other line and she explains the situation to him.

Shubhra asks Soham to find Ajoba and just then the latter’s friend reveals that he is fine and is sitting in the garden, as is angry and sulking. The phone rings again and Asawari picks up, pleasantly surprised to hear Abhijeet again on the other end. She confides in him and tells him that Ajoba is upset with her and she doesn’t know how to make it up to him. Abhijeet advises her to make a dish and lure him to come home. He tells her how to tempt him by describing the dish and assures her that the trick will work.

Asawari follows his advice and goes to the park. She finds Ajoba and describes the dish to him, which tempts him to finally come home. The episode ends with Asawari cooking the dish for Ajoba and him rejoicing it!

Will Asawari call up Abhijeet to thank him for his advice? Will they meet again soon? Stay tuned for all the updates here! Catch all the episodes of Agga Bai Sasubai, streaming for free on ZEE5.

Why Is Yesubai Upset With Sambhaji? Watch Swarajyarakshak Sambhaji On ZEE5!