In tonight's episode, Abhijeet feels special that Asawari took so much of efforts to make a sweater for him. 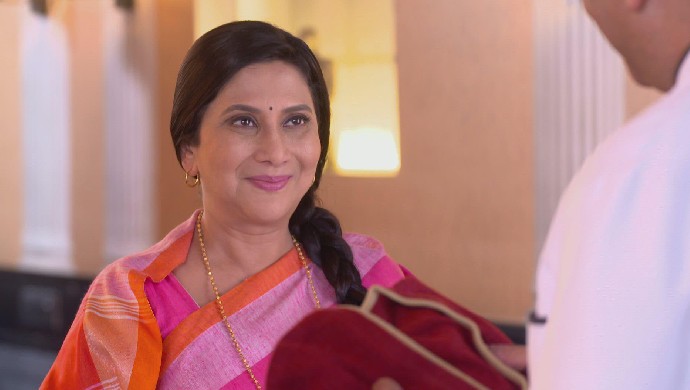 In the last episode of Agga Bai Sasubai, Shubhra asks Pradnya if she has forgotten who the real owner of the house is. She also reminds her what will happen if the police come to know that she had earlier asked her parents to get out of the house. Hearing this, Pradnya gets scared and realises that she might have to face the consequences. Abhijeet then tells her that if she wants to live in the house then she needs to abide by the rules set by Mr and Mrs Karkhanis.

In tonight’s episode, Asawari comes to the restaurant to give the sweater she made to Abhijeet. The latter feels special that Asawari took efforts for him. He wears the sweater and Asawari helps him. Just then, Pradnya comes there and clicks pictures of Asawari helping Abhijeet. Abhijeet goes to the kitchen wearing the same sweater despite feeling hot.

Pradnya comes home and tells Ajoba that she wants to show him something very important. Ajoba asks Shubhra to get his glasses. But before giving the glasses, Shubhra sees Asawari’s picture with Abhijeet in Pradnya’s mobile. She smartly shakes the phone so that it falls in the curry kept on the table. Pradnya gets annoyed and talks arrogantly with Ajoba. Hearing this, the latter asks her to leave the house immediately.

Later that day, Soham goes to Abhijeet’s restaurant with his friend. He asks Maddy about Abhijeet’s girlfriend but she tries to avoid telling him the truth. Just then, Abhijeet comes there and Soham realises that he is wearing the same sweater that Asawari had made for him. He feels ashamed of it and after going home, he tells Asawari to stop gifting such cheap things to Abhijeet.