In tonight's episode, Shubhra reads the message on the cake and tricks Pradnya to fall on it so that the cake gets wasted. 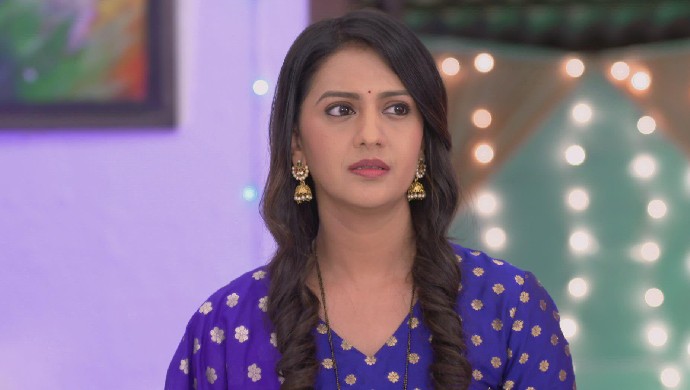 In the last episode of Agga Bai Sasubai, Abhijeet and Asawari are coming by taxi but unfortunately, their car gets punctured. Abhijeet then goes to find another taxi and comes with a fancy bicycle. Both of them then go on the bicycle together. Ajoba gets annoyed because they have already reached the venue and Abhijeet and Asawari haven’t. Pradnya plans to create a misunderstanding between Abhijeet and Asawari’s family by ordering a cake with a message that says Abhijeet loves Asawari.

In tonight’s episode, Ajoba is about to leave the party when Asawari and Abhijeet reach there but they apologise to him for the delay. Ajoba blames Asawari for being careless and as a punishment, he asks her not to celebrate her birthday. Shubhra and all others request Ajoba to at least wait for Abhijeet’s cake cutting since he has arranged a party for them.

Shubhra appreciates Abhijeet’s dress sense by complimenting him for his clothes. Abhijeet gives the credit to Asawari and hearing this, Pradnya gets jealous. She then clarifies to Abhijeet that she had replaced the shirt and shows him the gift Asawari had brought for him. Later, Abhijeet explains to Ajoba why they need to celebrate Asawari’s birthday as she is an important part of their family.

Inspired By Mumbai Pune Mumbai, Do These Things In Pune While You Are There

Like Prashant Damle’s Character In Bho Bho, Here Are Marathi Actors That…

Chala Hawa Yeu Dya: Gondya Ala Re Team To Make An Appearance On The Show, Watch…

Maddy brings the cake and tells Abhijeet to cut it. But before that Shubhra opens the box and gets shocked to see the message written on the cake. She immediately comes to know that Pradnya has done it. When Pradnya comes forward to see Ajoba’s expressions, Shubhra makes Pradnya stumble on the cake and it gets wasted. Later, Shubhra takes Pradnya to a corner and warns to avoid doing such things to get attention.