In the preview of the next episode, we see Soham getting jealous as Asawari receives a gift from Abhijeet. Find out the details inside. 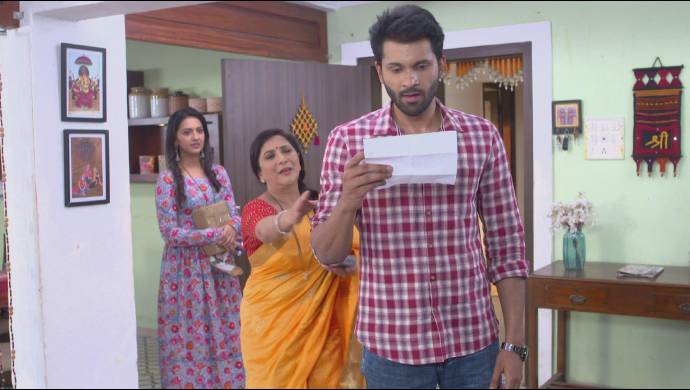 In the previous episode of the show Agga Bai Sasubai, we saw Ajoba making fun of Pradnya. Shubhra then asks the latter who she has gotten the second jar of laddoos for. Pradnya reveals that she got them specially for Soham. After a while, Asawari asks if Shubhra needs any help in the kitchen. The latter tells Asawari that she doesn’t need any help from her and asks her to relax. Just then, the doorbell rings and Abhijeet enters. Ajoba announces that the latter has come to meet him. Ajoba then asks him secretly to look for a lawyer who can help him with his last will. Soham tries to overhear their discussion. A while later, Shubhra convinces Asawari that her style of parenting is wrong as it can make her son selfish. Asawari realizes her mistake. Later, Abhijeet gifts Asawari a gajra and confesses that he misses her.

In the upcoming episode, we will see Asawari receiving a parcel. The parcel contains a pair of earrings with a handwritten note in it. As Asawari tries to read it, Soham snatches the note from her. Turns out, it has been written by Abhijeet. Asawari gets embarrassed and asks Soham to not read the letter aloud. Soham ignores her and continues to read the letter which Abhijeet has romantically written for her. Asawari asks Soham to stop reading the letter. On the other hand, a jealous Soham taunts Asawari by saying that Abhijeet should take romance classes instead of managing the hotel.