Has Shubhra called them to take her away? Find out what happens! 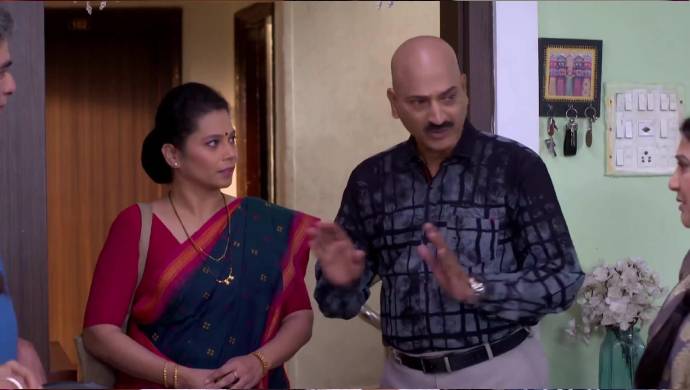 In today’s episode of the show Agga Bai Sasubai, we see Soham and Shubhra wishing Abhijeet-Asawari on their two-month wedding anniversary. Asawari can be seen wearing the saree which Abhijeet gifted her. Abhijeet talks to Soham and Shubhra about the pious bond of love they all share and how they must take care of it. Soham interrupts him and shows him and Asawari the gifts that he has bought for the them on their anniversary.

Watch the previous episode of the show here.

Asawari and Abhijeet are overjoyed by the gifts and they happily unwrap them. Asawari finds a set of bangles in the box and happily tells Soham that she loves them. As Abhijeet unwraps his gift, he finds bangles in his box too. Everyone including Shubra and Asawari are shocked as Soham asks Abhijeet if he liked the gift. The latter happily accepts it and says his wife would use them and anything that he owns is his wife’s property too. Asawari and Abhijeet then head out for lunch.

The next day, Abhijeet wakes Soham up and they go for a jog. When they return home, Soham can be seen lying on the sofa as Asawari removes his shoes and tries to console him as the latter complains about being tired. Just then, the bell rings and Abhijeet opens the door. They are all surprised to see Shubhra’s parents! Her father compliments Abhijeet for being such a great husband.

Pipsi Movie Review: A Sweet Story With A Strong Social Message That…

Vote: Anaji Pant Or Kamlakar – Which Role Do You Like Mahesh Kokate More…

Why do you think Shubhra’s parents are visiting? Stay tuned to find out!

Meanwhile, stream all episodes of Agga Bai Sasubai only on ZEE5!