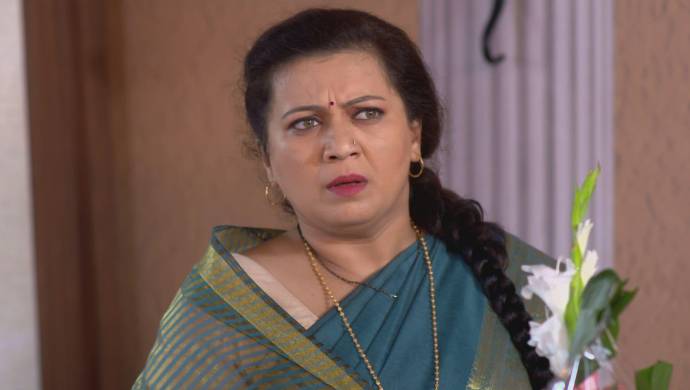 In the recent episode of Agga Bai Sasubai, Abhijeet Raje and Asawari go to eat an ice-cream. On their way back, Asawari starts sneezing and Abhijeet decides to take her home before she gets iller. Unknown to them, Pradnya is hiding close to the restaurant and watching them secretly. Meanwhile, at home, Soham wants to take Shubhra to Abhijeet’s restaurant for an ice-cream. He also wants to show her Abhijeet’s girlfriend. As they both reach the restaurant, Abhijeet isn’t there but his bike is parked outside. Shubhra quickly distracts Soham and they get out of there.

The following day in the morning of Asawari’s birthday, she wakes up to Abhijeet’s voice wishing her happy birthday. The voice is coming through a projector which Shubhra installed secretly the previous night. Asawari is surprised and happy. Then, Shubhra enters and hugs her. Later, as Asawari is with her family, Mr and Mrs Karkhanis come to her house. They are followed by Pradnya who is wearing a saree and a wig. She begins apologising to her in-laws and Baba.

Shubhra and Baba see through her pretentious apologises and are unwilling to forgive her. However, Pradnya says she will work on herself alone at home while Mr and Mrs Karkhanis stay in Asawari’s house. Later, Asawari shows Shubhra the gift which she got for Abhijeet. It is a watch which Asawari hopes Abhijeet likes. As she goes to Abhijeet’s restaurant, he is busy in a press conference. During this, Asawari keeps her gifts along with the other gifts. Unfortunately, Pradnya comes and replaces Asawari’s gift with clownish clothes. She wants Abhijeet to start disliking Asawari for this unthoughtful gift.

Tejaswini Pandit Celebrates Her Birthday With Bestie And Business Partner…