In tonight's episode, Shubhra tells Asawari that Abhijeet loves her unconditionally and has taken a lot of effort to be with her. 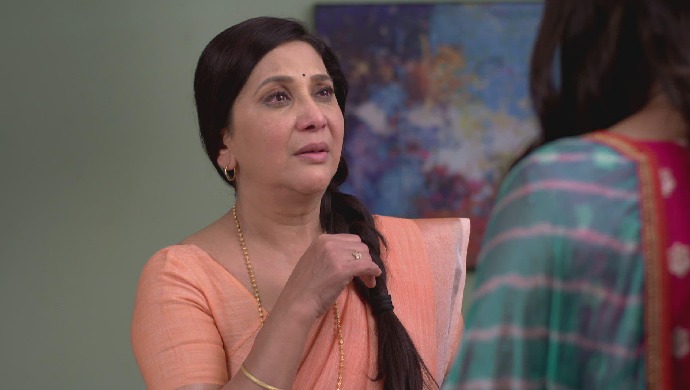 In the last episode of Agga Bai Sasubai, Abhijeet calls Asawari to ask about Soham and tells her that he has come downstairs. Asawari meets him and apologizes to him for leaving food. Abhijeet then tells her that she doesn’t need to be sorry because she has done a lot for him. He then tells her that he wants to spend the rest of his life with her and proposes her for marriage. Asawari is shocked to hear this as she did not expect that something like this would ever happen.

In tonight’s episode, Asawari is shocked to hear that Abhijeet wants to marry her. She remembers the time when Ajoba got annoyed with Madan when he told Ajoba about his marriage. She then leaves without saying anything.

Asawari comes home and tells Shubhra that Abhijeet shouldn’t have proposed to her for marriage because it is not her age to get married. The latter asks her why is it compulsory that one should not consider getting married after a certain age. She also tells her that Abhijeet loves her unconditionally and has taken a lot of efforts to be with her. Asawari agrees to everything but says that she cannot leave Ajoba and Soham because they are her responsibility. She then asks Shubhra to go and tell Abhijeet about her decision and console him.

On the other hand, Pradnya watches Abhijeet proposing Asawari and thinks of telling it to Ajoba and Soham. She then goes to see Soham who is acting as if he is injured. Pradnya tells Soham that from the time Asawari has become friends with Abhijeet, she does not give him attention. Hearing this Soham feels suspicious. Shubhra comes downstairs and tells Abhijeet that they will have to give some time to Asawari. Abhijeet says that he is ready to wait for her for a lifetime.

Mazhya Navryachi Bayko 3 December 2019 Preview: Popatrao Is About To Change His Decision?