Will she go? Find out by reading the details inside! 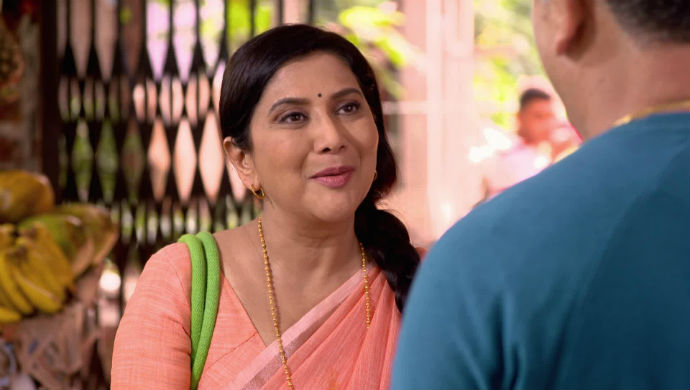 In tonight’s episode of Agga Bai Sasubai, we saw Asawari teaching Shubhra how to make a dish. She says that she (Asawari) will head to the vegetable market later. Meanwhile, Abhijeet while talking to his fellow chef Maddy says that he loves going to the vegetable market and will do so today to get stuff for his restaurant. Back home, Asawari is about to leave to go to the market when a parcel gets delivered to her place. She is surprised to know that it’s a microwave.

Shubhra says that she had ordered it. She adds that she has ordered the microwave for Asawari, so that she doesn’t have to keep heating food on the gas stove. Ajoba dismisses it saying that such things make women lazy. Just then, Asawari’s friend walks in and gets surprised looking at the microwave. She congratulates Asawari for having a modern father-in-law who accepts such things. Ajoba storms off while Asawari and her friend leave for vegetable shopping.

A little later, Ajoba tries to use the microwave but is lost. He starts heating his food and gets flustered when the microwave starts making funny sounds. Ajoba says the microwave is experiencing a short circuit and just then Shubhra and Soham intervene. She opens the door of the microwave and sees that Ajoba has put a steel container inside. She tells him that he can’t put any steel utensil inside. He gets furious and tells Shubhra not to teach him these things. He asks Soham to return the microwave. Soham gets upset with Shubhra and tells her that she should have asked him before ordering as Ajoba has an issue with accepting new things.

Meanwhile, at the vegetable market, Abhijeet shops and meets the usual sellers. He chats with an old woman at the market, who is a close friend. Abhijeet realises that the woman is sick and asks her to go to the doctor. The woman asks him to sit at the mandi and guard the vegetables while she’s away. In order to hide himself, Abhijeet covers his face with a cloth. Just then, Asawari and her friends walk in and visit the mandi where he’s seated. Abhijeet’s topic is brought up and Asawari praises his cooking as well as his nature. Abhijeet gets happy hearing her kind words. She asks the price for lady fingers and Abhijeet answers.

Asawari is taken aback after realising it’s him seated at the mandi. He walks out and soon everyone comes to know that it’s the famous celebrity chef among them! Asawari’s friends start fawning over him and get surprised when he gives attention to Asawari. He asks her for her favourite dish and when she says she likes pumpkin, he buys it for her.

Abhijeet adds that if she wants him to not take the camera then she would have to do something for him. He invites Asawari for a special meal at his restaurant. She says no and the episode ends with Abhijeet saying that he’ll wait for her! Will Asawari go? Stay tuned for all the updates here!

Are Saumitra And Radhika Going To Get Together? Watch Mazhya Navryachi Bayko On ZEE5!