In tonight's episode, Abhijeet calls Asawari to the restaurant to take her help in selecting his outfit for an important meeting. 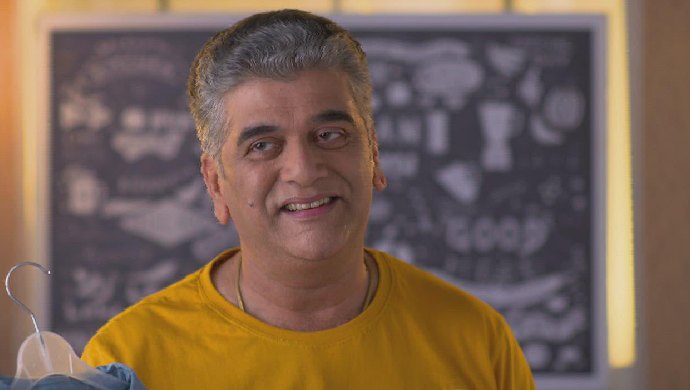 In the last episode of Agga Bai Sasubai, Asawari comes to meet Abhijeet and tells him that she has come to apologise to him. He tells her that he is not angry at her and requests her to try a few special dishes from the chilli festival. Asawari and Abhijeet enjoy guessing the ingredients used in the dish and spend a great time together. Abhijeet extends his hand as a beginning of their new friendship and Asawari blushes a little bit.

In tonight’s episode, Ajoba gets annoyed by seeing Abhijeet on the television. He tells Asawari to call the network operator and ask him to remove the channel that airs Abhijeet’s cookery show. Just then, Sulbha comes home and tells Asawari that today there will be a back to back telecast of Abhijeet’s show.

Later, Soham asks Asawari to make some snacks at home but she tells him that she does not have the ingredients to make it. Asawari gets ready to go to the market to bring vegetables. While she is on her way, she gets a call from Abhijeet asking her to come to the restaurant immediately. When Asawari reaches the restaurant, Abhijeet tells her that he needed her help to choose a shirt for an important meeting.

Having A Stressful Day? These 5 Gorgeous Locations From Dhaaga Will Calm Your…

At home, Soham calls his friends to watch a cricket match. Ajoba gets disturbed by their noise and asks them to stay silent. Shubhra comes home and requests Ajoba and his friend to go into the bedroom and talk while Soham watches the match with his friends. She promises them to make snack for them. Meanwhile, Abhijeet tells Asawari that he is going to the market so he can drop her to the market.