In tonight's episode, Ajoba tells Asawari that Abhijeet has agreed to marry Maddy that is why they both are having a party. 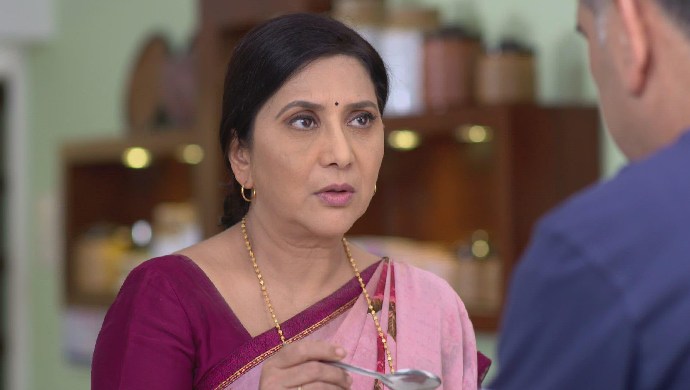 In the last episode of Agga Bai Sasubai, Ajoba assures Maddy that he will talk to Abhijeet and convince him to marry her. Later, Ajoba calls Abhijeet and asks him to come home as he wants to discuss something important. Ajoba tells him that he has been hearing a lot about both of them. He says that he may not be her real father but as an elder person in the house, he wants to talk to him about her marriage. Abhijeet gets shocked and thinks that Ajoba is talking about Asawari.

In tonight’s episode, Abhijeet is all excited as he thinks that he is marrying Asawari. Ajoba tells him that now onwards he will stop calling him “Chapal Chor” because now he is his son-in-law.

Shubhra comes home after office and gets surprised to see Abhijeet and Ajoba bonding with each other. Upon asking the reason, Ajoba says that she will get to know the reason soon. Asawari is wondering why is Abhijeet so excited. On the other hand, Maddy comes to the restaurant and announces that she is getting married to Abhijeet. Everyone congratulates her. Maddy then gets an idea to have a party in the restaurant and invites Ajoba and Asawari because it wouldn’t have been possible without them.

Later that day, Abhijeet comes to the restaurant and sees that Maddy is glad about his marriage with Asawari. She tells him that she has invited Asawari and Ajoba for a small party. On the other hand, Asawari asks Ajoba why has Maddy kept the party. The latter tells her that Abhijeet has agreed to marry Maddy that is why they are giving a party. Hearing this, Asawari gets upset and tells Ajoba that she is not feeling well and asks his permission to return home.