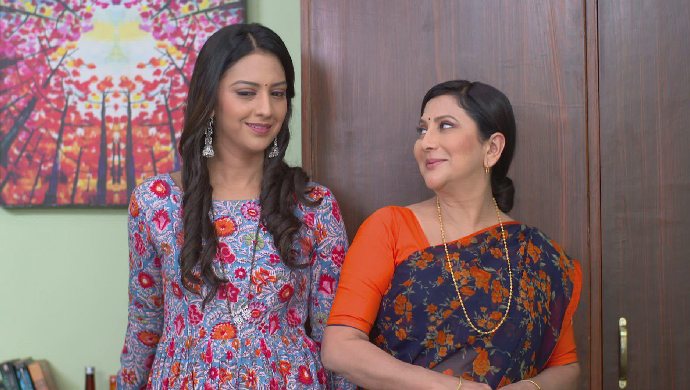 In the last episode of Agga Bai Sasubai, Asawari is making a cake for Ajoba as he is having a craving to have something sweet. Maddy comes home to give the cheque to Asawari for her contribution. Maddy assumes that its Asawari’s birthday and she quickly calls Abhijeet and informs him about it. He gets excited and makes a plan to celebrate Asawari’s birthday and surprise her. Asawari says that she liked the surprise but apparently it’s not her birthday.

In tonight’s episode, Abhijeet challenges Asawari to find out her birthday within the next 24 hours. He then calls Shubhra and informs her about the challenge. Abhijeet asks her if she will help him to find out Asawari’s birthday and the latter agrees to help him.

Asawari overhears Shubhra’s conversation and tells her that since she has chosen to be on Abhijeet’s side, now she will make sure she will give them tough competition. Shubhra asks Soham about Asawari’s birthdate but he says that he does not remember the exact date. Abhijeet calls Asawari and asks her about her details by changing his voice. Just then, Maddy comes there and ruins Abhijeet’s plan. Meanwhile, Shubhra checks all the documents but Asawari tells her that she must be aware of the places in the house.

Nude: 5 Best Scenes From Kalyanee Mulay And Chhaya Kadam’s Film That Are…

Later that day, Abhijeet sends Maddy at Asawari’s place and asks her to talk to him using the wireless headset and repeat what he says. Everything works fine until Abhijeet mentions Vishwas’ name and Maddy repeats the same. Asawari suspects Maddy and asks her if she is talking to Abhijeet. The latter gets surprised and reveals the truth.