Does all go smoothly? Read the details inside to find out! 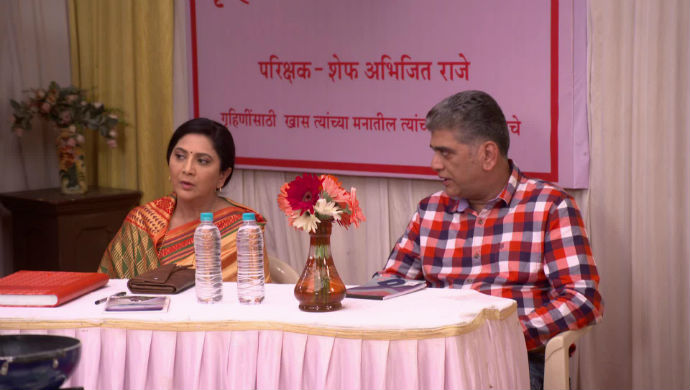 In tonight’s episode of Agga Bai Sasubai, we saw Asawari talking to Shubhra on the phone and telling her about the workshop that Abhijeet had asked her to judge. Shubhra encourages her to go and says that she will inform Abhijeet on her behalf. Later, Soham returns home but as usual, is in an irritable mood with Asawari. He notices his file in her hand and asks why she has it. Asawari tells him that she and Abhijeet used it to find the contact to his office. Soham gets upset and tells her that she shouldn’t let Abhijeet interfere in his business. Amidst this, Asawari asks Soham if she can step out for a bit and Soham says he doesn’t care, she can do whatever she wants.

Asawari gets a call from Abhijeet’s restaurant confirming whether she’ll be able to make it or not and she says yes. A while later, Asawari reaches the workshop and sees Pradnya there as well. The latter tries to make it look like Asawari knows Abhijeet through her. She gets jealous seeing Asawari get all the attention and doesn’t realise that she’s the judge. The competition begins and Pradnya is stunned knowing that Asawari would be judging the competition. Abhijeet talks to Asawari and comforts her. He takes her for a round to observe all the competitors.

Later, Asawari is asked to say a few words and she appreciates everyone’s cooking. She declares the winners and Pradnya gets upset learning that she hasn’t won. She yells at Asawari, who gets embarrassed. Abhijeet defends Asawari and puts Pradnya back in her place. The episode ends with Asawari being grateful for Abhijeet’s kindness.

But will this friendship continue when Ajoba comes back from his hometown? Stay tuned! Catch all the episodes of Agga Bai Sasubai, streaming for free on ZEE5.