The two had a falling out in the last episode. But are they on good terms again? Find out inside! 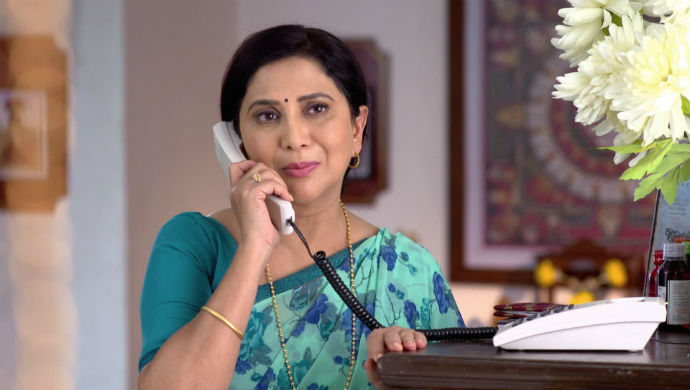 In tonight’s episode of Agga Bai Sasubai, Asawari feels immensely guilty for how Ajoba treated Abhijeet Raje. Shubhra tells her to first forgive herself as it wasn’t her mistake and then call Abhijeet, apologising to him. Asawari says she doesn’t want anything to do with that man anymore. A while later, Soham has an argument with Asawari, saying that he has to leave for work and that she should be prepared to see him off. Asawari is upset about it and starts crying. Just then, her friend walks in and consoles her. Meanwhile, back at the restaurant, Abhijeet ponders over last night’s incident with Ajoba and Asawari.

At home, Asawari watches Abhijeet’s cooking show and starts missing him. At the restaurant, two organisers from a cookery competition come to meet Abhijeet and he has a word with them about his experiences. Shubhra and Soham are on their way to get some coffee when she gets a call from work. She tells Soham that her boss is asking her to go to Lonavala for official purposes.

Soham encourages her to go. Meanwhile, the organisers who met Abhijeet, come to visit Asawari. They talk to her about the upcoming cookery competition and ask her to take a workshop. The men say that they have been sent by Abhijeet and tell her that he appreciates her cooking and wants her to get associated with the competition. They also tell her that they were told not to reveal his name but had to since she insisted that they tell her the source.

Asawari recalls the incident with Ajoba and politely refuses the offer. She calls Abhijeet and tell him that she has said no to the workshop. The episode ends with Asawari apologising to Abhijeet and the latter says that he’s sorry too for interfering.

Does this mean that the two will be renewing their friendship? And will Asawari conduct the cooking workshop? Stay tuned! Catch all the episodes of Agga Bai Sasubai, streaming for free on ZEE5.