Why does she do so? Find out! 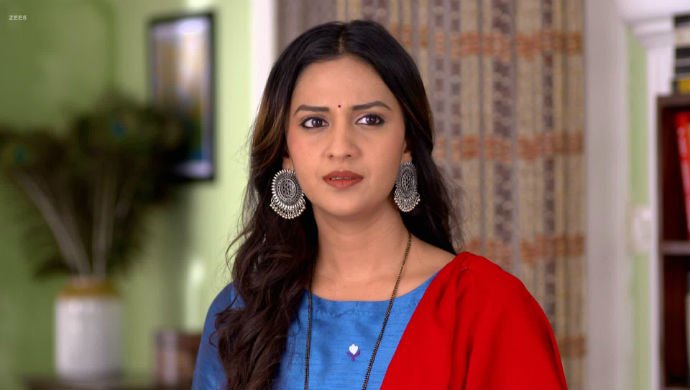 In tonight’s episode of Agga Bai Sasubai, we saw Asawari engaged in the usual household work. A while later, Ajoba’s friend pays a visit to him. He invites the whole family for lunch at his place. Soham asks Asawari to remove his clothes when Shubhra gives him a dirty look, indicating that he can do it himself. Asawari hurries towards the cupboard and looks through Soham’s clothes when an old saree falls down from the shelf of her own closet. Shubhra encourages her to wear it to lunch at Ajoba’s friend’s place.

Later, Shubhra gives Asawari a makeover and the latter is conscious about it. Soham is asked for his opinion and he makes a dirty face, saying that doing all this doesn’t suit her at this age. Asawari gets embarrassed and quickly rushes inside to change. Shubhra gets furious with Soham. She approaches Asawari and says that she’s disappointed that she (Asawari) took Soham’s words seriously and changed. Shubhra tells Asawari that the latter should dress up for herself and not to please others. She says she will give Soham an earful but is stopped by Asawari. Just then Soham walks in asks the two to hurry up.

Shubhra gets back at him and criticises his shirt. He gets conscious and brings out a fancy shirt, asking Shubhra for her opinion. She puts him down just like he behaved with Asawari and makes him realise his mistake. Meanwhile at Ajoiba’s friend Karkhani’s house, their daughter-in-law Pradnya is irked with him and his wife for inviting Asawari and the rest over. She is angry as she has to work. Just then the doorbell rings and Pradnya welcomes the family.

Asawari rushes to the kitchen to help Pradnya’s mother-in-law. She mentions that Abhijeet Raje was in their building and Asawari gets conscious. Later, everyone gathers in the hall for lunch and eagerly waits for Abhijeet’s cookery show to start on TV. Pradnya talks about how much she admires Abhijeet and how lucky will the woman be who lands up with him.

The episode ends with Asawari blushing and Shubhra noticing the same. Is Asawari in love? Stay tuned for all the updates here! Catch all the episodes of Agga Bai Sasubai, streaming for free on ZEE5.

Agga Bai Sasubai 2 August 2019 Preview: Abhijeet To Disguise Himself As A Vegetable Seller