It's time for you to choose between Abhijeet Khandkekar, Ashutosh Patki, and Hardeek Joshi and decide who looks the best in denims. Vote inside! 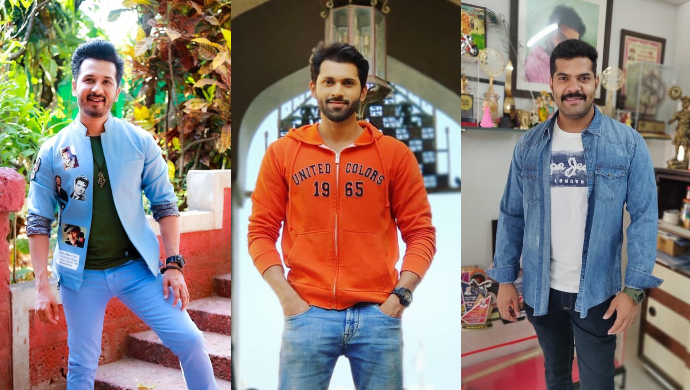 Denim has been in style since times immemorial and has been adorned by common man and celebrities alike. Various Marathi stars too follow the fad of wearing denim, to keep their fashion game up. We checked the Instagram profiles of some of them and dug out the best denim looks. Let’s look at these actors who rocked the denim look and took social media by storm. First up on our list is Abhijeet Khandkekar.

Watch Abhijeet Khankekar in his element in Mazhya Navryachi Bayko.

Abhijeet, who plays the devilish role of Gurunath in the family drama Mazhya Navryachi Bayko, likes to be on top of his fashion game. He recently sported a custom-made jacket carrying pictures of legendary Bollywood actors like Dev Anand and Dharmendra. He teamed this up with a pair of pale blue denims. Doesn’t he look charming?

Ashutosh Patki rocked the denim look during the outdoor shoot in Rajasthan of his serial Agga Bai Sasubai, in which he plays the role of a troublesome husband Soham. The actor looked dashing in a bright orange hoodie and completed his look with a pair of faded blue denims. Don’t miss his white sneakers which complement his look perfectly!

Those who follow the crowd usually get lost in it #shooting #agabaisasubai #zeemarathi P.c – @tejashripradhan 🤗🤗

While we certainly cannot decide which actor looks the best in denims, we thought of contesting a poll so that you guys can help us choose. All you need to do is vote below and stay tuned for the results!

Which Actor According To You Rocked The Denim Look?
Don't Miss

Exclusive: ‘Nivedita And I Have Never Had Any Problems,’ Says Girish…

Chala Hawa Yeu Dya: 5 Hilarious Moments From The Show That’ll Leave You In…

Mazha Hoshil Na: 5 Gorgeous Pictures Of Gautami Deshpande That Will Make Your…

Don’t forget to tune in to the show streaming on ZEE5.