7 Scenes From Date With Saie Where Rohit Rao Proves He’s An Actor To Watch Out For!

The actor plays villain Himanshu in this ZEE5 original Marathi series and does a stellar job. 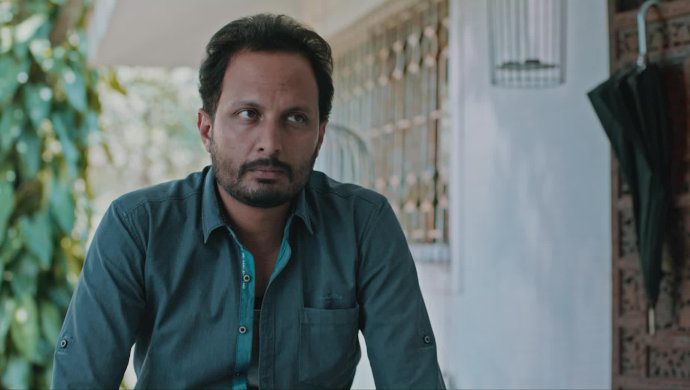 You know an actor has played a convincing villain when he/she manages to make you hate the character. Rohit Dashrath Rao succeeds in doing so as Himanshu in ZEE5’s original Marathi series. The actor plays a filmmaker who is obsessed with popular Marathi star Saie Tamhankar and goes to extreme lengths to make her act in his film.

In case you haven’t watched the series, you can check it out below:

Rohit plays the part with ease and conviction. Here are seven scenes from the show where he stood out:

In the beginning scene of the show, we see Himanshu meeting Saie, after years of planning and plotting. The obsessed filmmaker must come across as a gentleman who is trying to help Saie, when she gets mobbed during an event. Himanshu helps Saie get into her vanity van and has a quick chat with her. He seems so normal, that it’s hard to tell the craziness he’s capable of. Here, Rohit displays immense control over his craft, cut to, when he starts acting maniacal post his meeting with Saie. The effortless switch between these two extreme mind frames is hard to manage but Rohit proves that a talented actor like him can do so convincingly.

2. Himanshu gets Saie a lift in his car

Certain strategised events by Himanshu in this episode propel Saie to sit in his car. Here we see the filmmaker calm and composed, minutes after he has lost his cool at his helper for not carrying out instructions properly. Rohit is natural in this scene as he scolds his boy Venkya and puts up a facade as Saie’s knight in shining armor the next second. What a chameleon!

3. Himanshu gets beaten by cops

Villains are shameless and Himanshu more than proves it in this scene where he gets caught by police and is tortured. Despite getting brutally whipped, Himanshu laughs at the policeman. He even has the nerve to correct the cop and say, “It’s Singapore,” when the latter calls it ‘Singapur.’ What guts! This scene makes you wince and laugh at the same time and Rohit’s performance is stellar as the stubborn goon who won’t give in.

4. Himanshu confesses his love for Saie

Saie hosts a house-warming party and invites Himanshu. After the party is wrapped up, he confesses his feelings for her. The latter is disgusted by his behaviour and asks him to get out of the house.But Himanshu stays put and convinces Saie to give him a chance. Here we see the character’s desperation and vulnerability. Rohit’s act is powerful here as the jilted lover, pining over his lady love.

Himanshu has a hard time dealing with Saie’s rejection and he makes sure he seeks revenge. The filmmaker manages to catch hold of Saie and asks her to shoot a scene in which she asks Himanshu for forgiveness for the way she turned him down, as she too loves him. Here, we see Himanshu taking retakes, trying to get the perfect shot. Rohit is so effortless in this scene that you can’t help but hate him and laugh with him at the same time. The sheer morbidity of his character is hard to comprehend at this point.

This seen will shock you to the bones. In the show, Himanshu asks Saie to shoot a scene for his film in which he is seeking permission from his parents to marry her. When his father (played by a random man caught by Himanshu) refuses to accept their relationship, the villain whips out his gun and shoots him. You would think it’s for the scene until seconds later you realize that he has murdered the man for real! It’s here we realise the evilness Himanshu is capable of and Rohit carries off this scene perfectly.

Throughout the series, we see Saie trying to escape Himanshu’s clutches but in vain. The goon manages to catch hold of her each time and forces her to shoot scenes for his film. In the climax, Himanshu wants Saie to commit suicide along with him, as his film needs to have a tragic ending. By this point, Himanshu turns completely insane and his maniacal laughter is proof. Rohit is menacing and will send chills down your spine with his impeccable performance.

Which scene of Himanshu’s is your favorite? Hit the comments section below!