The actors who play Vikrant and Isha on the show, recently conducted a live video for their fans. Here are the best moments from their chat, inside! 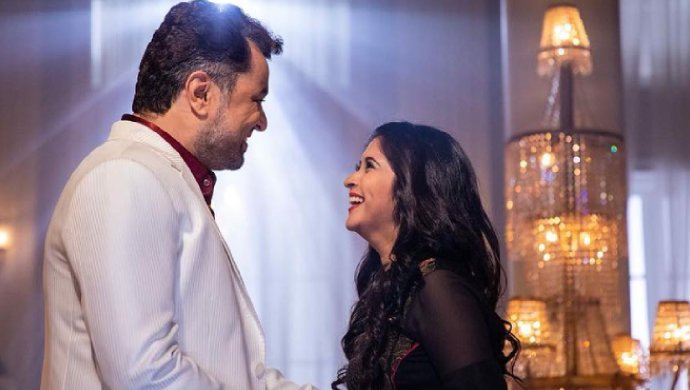 Zee Marathi’s popular show Tula Pahate Re is nearing its end. The show starring Subodh Bhave and Gayatri Datar will see a wrap in July and we are as heartbroken as you are. It’s sad to know that we will no longer get to see our favourite Isha and Vikrant on the small-screen. But Subodh and Gayatri are urging their fans to not be let down and enjoy the show while it lasts. The actors took to Facebook and conducted a live video, to cheer up their fans and thank them for the support and love.

Here are 6 best moments from their live Facebook chat.

The video started with Subodh greeting his fans and Gayatri preparing to eat her lunch in the background. He pointed at her food and said, “I think ever since Gayatri has found out that she is Rajanandini on the show, she has started eating her share too.” Lol!

2. When Subodh shut down a troll

While talking to his fans, Subodh was met with a negative comment by a troll. The actor decided to take him head on and said, “If you don’t like the show, there’s no need to be here or watch it. Either way, I’m here to speak to people who love the show. Ouch!

3. Gayatri spoke about being nervous when shooting with Subodh

Tula Pahate Re is Gayatri’s first show and anyone in her place would be nervous, especially when shooting with a superstar like Subodh. “I was a wreck on the first day of shoot. But Subodh dada helped me out and comforted me. He broke the ice, instead of it being the other way round, because I was so nervous,” she said.

4. Subodh recalls the time he met Gayatri 15 years ago

Subodh revealed to his fans that he had met Gayatri nearly 15 years ago and joked that she has changed a lot since then. He added that Gayatri has transformed since the first day of shoot till now. “She is extremely passionate about her work and is eager to learn. Her acting has also solidified over time.”

5. Gayatri thanks Subodh for being a great co-star

Gayatri said that she couldn’t have reached where she is today, without her Subodh dada’s support. “He has always been there when I needed his help. I knew nothing about facing a camera or delivering dialogues. Whenever I asked Subodh dada for help, he would oblige,” she said. Aww!

6. Subodh and Gayatri thank their fans

Our beloved Vikrant and Isha thanked their fans for their immense support and love. The actors added that they would miss Tula Pahate Re and promised to keep in touch with the audiences through other projects.

You can check out the entire chat on Subodh’s official Facebook page here. Catch all the episodes of Tula Pahate Re, streaming for free on ZEE5.

Will Gurunath And Radhika Get Back Together? Watch Mazhya Navryachi Bayko On ZEE5!