We tell you why you shouldn't give this show a miss. Read inside! 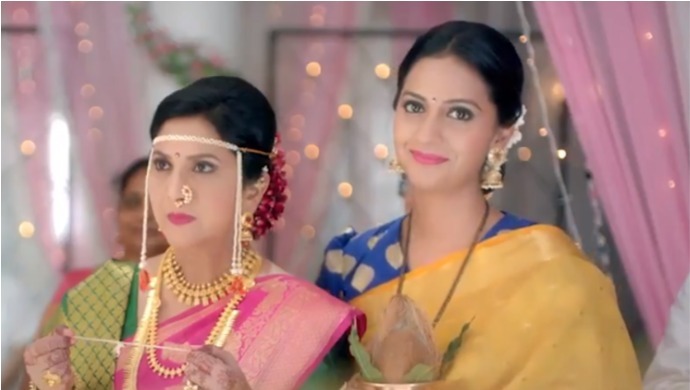 We have all been witness to an age-old trend in daily soaps- the mother-in-law and daughter-in-law not getting along. Most of us have seen serials in which the saas is making the bahu’s life miserable and vice-versa. But Agga Bai Sasubai starring Nivedita Saraf, Tejashree Pradhan and Girish Oak is a breath of fresh air. It steers clear from the typical drama and instead tells the story of a strong between Kaveri (Nivedita) and her daughter-in-law Shubhra (Tejashree). The show is set to replace Subodh Bhave and Gayatri Datar’s Tula Pahate Re.

Watch the promo of the show below:

Here are 5 reasons why you should definitely watch this serial.

With a stellar cast like Tejashree, Nivedita and Girish, one can only expect fireworks! The three actors have established their craft in Marathi cinema and we are certain that they will bring brilliant performances to the table.

Agga Bai Sasubai will show a strong bond between a mother-in-law and daughter-in-law for a change. That is a refreshing take on this relationship and it’ll be exciting to see what Nivedita and Tejashree have in store for us.

The two will be seen as a couple and from the promo of the show, it’s evident that fans can expect solid chemistry between Nivedita and Girish. The two make a great pair, don’t they?

Out of all the people in Kaveri’s life, it is her daughter-in-law Shubhra which is her backbone. Hence, it will be exciting to see how she manages Kaveri and encourages her at every step.

5. A modern take on things

Agga Bai Sasubai is daring in its concept where a widow Kaveri, remarries and is given away by her daughter-in-law. No other show has depicted a sroryline like this and it’s evident that television show producers and makers are evolving with time. They are ready to put forth progressive content, that will be accepted by fans.

Stay tuned for the first episode releasing on July 22, exclusively on ZEE5! Catch all the episodes of Tula Pahate Re, streaming for free on ZEE5 here.

Learn How To Recognise Your BFF From Tejaswini Pandit And Abhidnya Bhave!

Naal Trailer Review: Srinivas Pokale's Film Is A Tearjerker That Will Stay With You