5 Reasons Why Dil Dosti Duniyadaari’s Sujay Reminds Us Of Monica From F.R.I.E.N.D.S

The character played by Sujay Sathe, comes close to Monica. Find out why we say so! 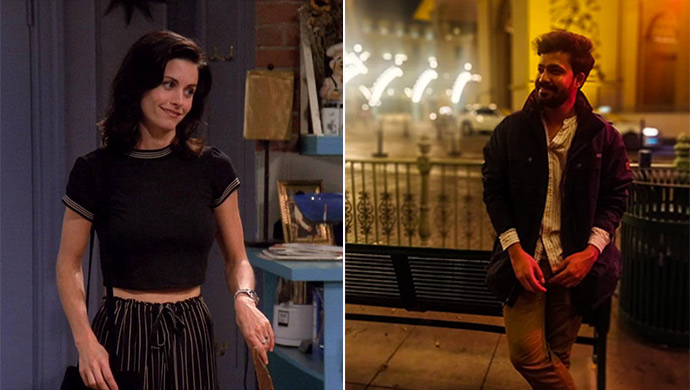 Zee Marathi’s popular youth show Dil Dosti Duniyadaari is often referred to the Marathi version of F.R.I.E.N.D.S. Most people are familiar with the popular American sitcom that tells the story of six friends Ross, Rachel, Joey, Phoebe, Chandler and Monica, living in Manhattan and facing the highs and lows of life together. DDD has a similar plot, where six youngsters Sujay, Reshma, Anna, Aashutosh, Minal and Kaivalya live under one roof and tackle challenges together. From the setting to the humour to the characters, DDD is similar to F.R.I.E.N.D.S in many ways.

Those familiar with with the American sitcom will find similarities between the characters shown in it and DDD. One such example is that of Sujay, who comes close to Monica from F.R.I.E.N.D.S. From his approach towards life to his lifestyle, there’s a lot in common between the two. We list out 5 such similarities…

Gaurav…he made me like neckties and glasses… And I love him now.. Do you? Pic courtesy- Prasad Jagtap

Sujay is very particular about his things and likes the house to be kept a certain way. He is disciplined and likes a code of conduct to be followed by his friends. Sounds familiar? Monica is known to be ‘high-maintenance’ in the show and like Sujay, she too is a disciplinarian at home, especially with her own partner Chandeler.

Sujay is a bit of a ‘know-it-all,’ and is quick at making decisions. Instead of crying about things going wrong, he looks for possible solutions. Monica too is sharp and efficient. Amongst Rachel, Phoebe and herself, she is clearly the most intelligent one and is hands on.

Monica is known for her hosting skills and even goes out of her way to take care of others. Remember how she would always keep extra food for Joey in her fridge? Sujay is equally caring and takes great measures to help out his friends.

The house that Sujay and his friends stay at, belongs to his Kaka. This reminds us of the episode from F.R.I.E.N.D.S where Monica revealed that her apartment actually belonged to her grandmother.

Sujay is a scholar and generally studious by nature. Monica shares a similar characteristic and this is proved when she and Phoebe take a class together and she convinces the professor to conduct an exam!

Would you agree with our assessment? Post your thoughts in the comments section below!

If You're In The Mood For Some Light-Hearted Comedy, Watch Chala Hawa Yeu Dya Only On ZEE5!

5 Bold Scenes From Sex Drugs & Theatre That Are Path-Breaking

EXCLUSIVE: It Was My Father's Dream To See Me In Ratris Khel Chale, Says Apurva Nemlekar