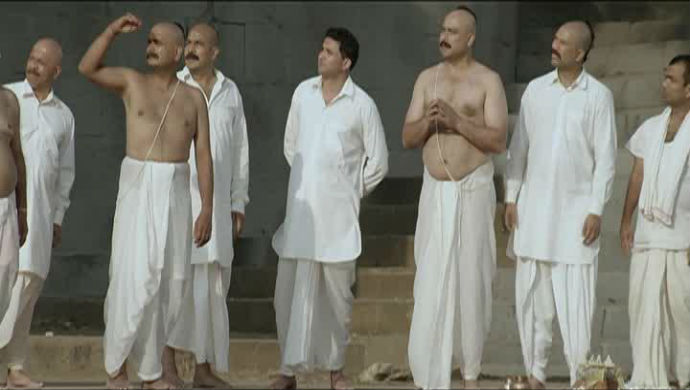 Kaksparsh starring Priya Bapat and Sachin Khedekar, tells the story of a girl named Uma (Priya) who gets married to Mahadev (Abhijit Kelkar). But the latter passes away at the night of their consummation and Uma is subjected to regressive customs, that all widows were forced to follow among Hindu Brahmins. Uma is time and again protected by her brother-in-law Hari and the two eventually develop feelings for one another. Aside from focusing on a complex relationship between Hari and Uma, the film also sheds light on the Kaksparsh or pind daan ceremony that is followed by Hindus.

Here are 7 important facts you should know about the ritual.

1. The pind daan or Kaksparsh ceremony is performed at the time of a person’s funeral. The deceased’s family member offers seeds as food to crows. If the crows eat the food, it is a sign that the dead’s soul can depart in peace. If not, it is believed that the dead can never attain salvation.

2. The pind daan ceremony is preferably performed in places such as Gaya, Haridwar, Badrinath, Kurukshetra, Allahabad as these places are considered auspicious.

4. Though the pind daan can be performed throughout the year, it is believed that the 18-day-period in the Amawasya when there is Krishna Paksh, and the Pitri Pakshmela is being held, is the most auspicious.

5. It is believed that the pind daan is compulsory, especially for those that were materialistic in nature. For such people, it becomes harder for their spirit to get detached from relatives and family members and thus pind daan makes it easy.

Watch Kaksparsh and post your thoughts about the movie in the comments section below!

These Behind-The-Scenes Pics Of Rana's Return On Tuzhat Jeev Rangala Will Interest You!